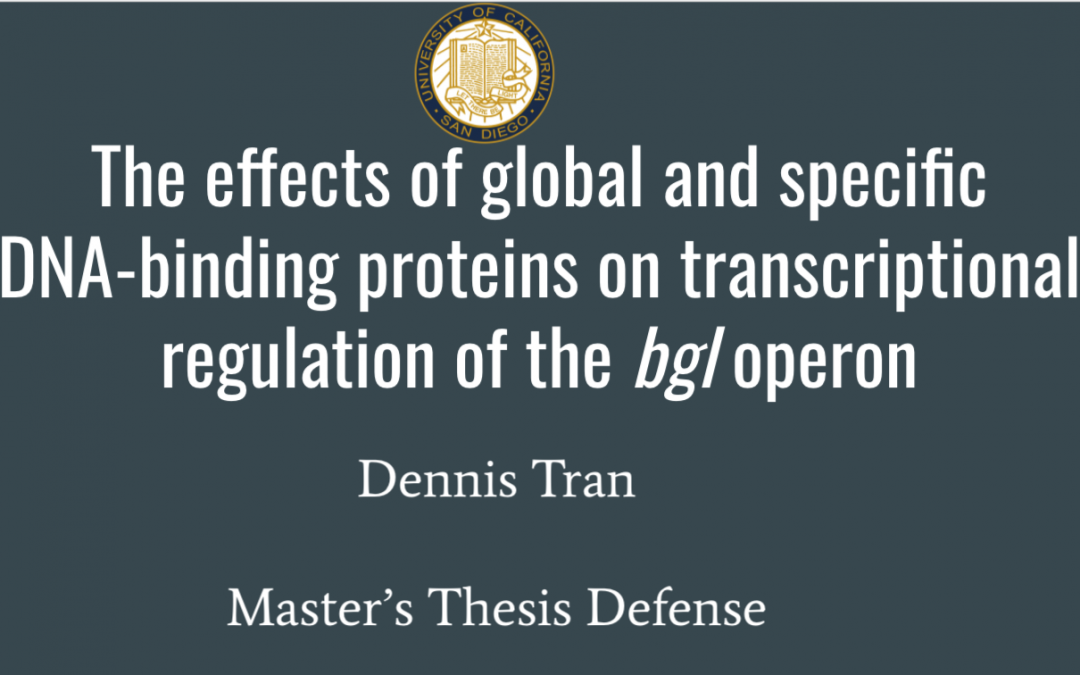 Congratulations to our grad student Denis Tran for a successful defense of his Master’s thesis on Jun 23, 2021.  The title of his thesis is “The effects of global and specific DNA-binding proteins on transcriptional regulation of the bgl operon”.

The bgl operon is silent in wild-type strains of Escherichia coli (E. coli) and requires mutational activation (for example, by insertion of the transposon, Insertion Sequence 5 (IS5) in the promoter region), thereby allowing expression of functions necessary for the utilization of β-glucosides. Thus, it is normally cryptic under laboratory conditions, but nutrient scarcity in the presence of beta-glucosides can promote the occurrence of mutations that activates the bgl operon, conferring a Bgl+ phenotype and allowing the cells to utilize beta-glucosides as a carbon source. In this work we characterized the transcriptional activities of different DNA-binding proteins, known to regulate bgl expression, in the absence and presence of salicin, measuring β-galactosidase activities using transcriptional lacZ reporter gene fusions. We found that Crp is a substantial activator of the promoter region of bgl operon expression while Hns is a potent repressor. Our studies also determined the mechanism by which oligomerization of Hns allows formation of a loop between two binding sites, one in the promoter region and one internal to the downstream bglG gene, that is necessary and sufficient to silence bgl operon expression. IS5-mediated activation of bgl operon expression is therefore due to loss of the Hns binding site in the promoter region, blocking loop formation. To accomplish this, a mutant hns that abolishes its associative properties, but does not prevent binding to its sites in the DNA, was used. We showed that although this mutant protein still binds to its binding sites in the DNA, it gives rise to increased bgl operon expression, comparable to that of a strain that is Bgl+ due to an IS5 insertional mutation, indicating that eliminating looping is sufficient to relieve repression.